The Quilt as a tool of Expression, Protest, and Awareness: Literature as a Strategy

Going through the analysis of my second panel, I was on the look of different strategies that would serve the purpose of the quilt. As I came up with Robert Chesley’s panel I was able to do so. His panel opened me the doors of another aspect of the HIV/Aids culture, literature and theater. Furthermore, it also demonstrated how a different strategy of Expression, Protest, and Awareness is efficient enough to provide different but equally valuable information of the History of this disease and the struggles it created among society.

Robert Chesley’s panel consists of six different parts which are the rectangular blocks that contain the different colors of the Rainbow Flag or LGBT flag. These colors are the background of the panel which is formatted vertically. The panel contains various images of Robert in which the viewer can observe him in three different stages: happy, serious and friendly. There is a quote included in the third and fourth rectangle which was one of his favorite quotes and he had it tattoed on his back. At the bottom 4 of his major publications are included along with a concert made after he died where many of his songs were performed. 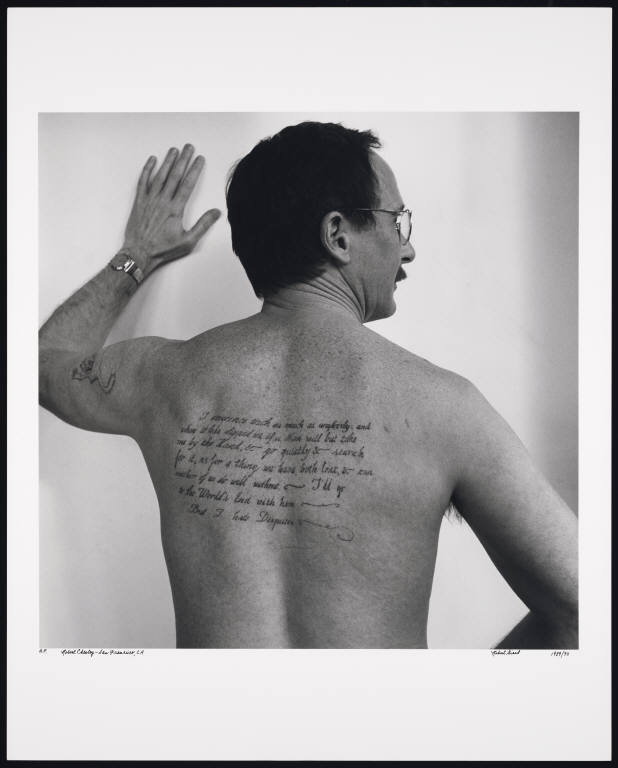 Robert Chesley showing the quote tatooed on his back.

Robert Chesley was a musician, playwriter, and composer born in 1943. He graduated from Reed College in Portland, Oregon where he learned about music and became a musician and songwriter as well. “In 1976, he came out as a gay teacher and moved to New York City. During the next few years his essays and theater criticism appeared in Gay Community News, The Advocate, Gaysweek, The San Francisco Review of Books, The Bay Guardian and The New York Native.”  Ever since he utilized his talent to be an activist and influence people through his plays and songs as well.

Through the panel of Robert Chesleys, there are many revelations made with visual an written rhetoric.   His plays all address a problem amongst victims of HIV/Aids and society. Jerker or the Helping Hand for example is a protest against the stigma of HIV/Aids were he wantes to address and change the stigma. Night Sweat is a way of expresssion to let the audience know the crude reality and difficulties that families of victims face through the process of recognizing the disiease in a family member. Dog Plays and A Stray Dog, are a way to express how people from the LGBT community feel aside and alone from society. Is a way of protest simultaneously because Chesley explains how he feels like a stray dog who is ignored often and not given attention at all.

There is no doubt of the great influence and legacy that has Robert Chesley. Fr gay theater, he is one of the most prominent figures still nowadays. Furthermore, for theater and activism as a whole, he serves as an example for having the courage to tells the truth but having some creativity as well. His work is perceived by the panel which contains all his work which serve as a strategy to deliver the audience a message of the crude reality they lived beginning the HIV/Aids crisis and a year later. It also serves as an evidence for society to understand how this community was marginalized and treated as a separate part of society. A Broadway Publication of Robert Chesley

Cover of a compilation of Robert’s plays